TASHKENT, April 21. /“Dunyo” IA/. Yesterday, representatives of the transport and customs authorities of Uzbekistan held regular consultations with the Secretariat of the Turkic Council in a video conference format, reports “Dunyo” IA correspondent.

The meeting was attended by Deputy Minister of Transport Abdusamad Muminov, Deputy Secretary General of the Turkic Council Mirvokhid Azimov, as well as experts from the Ministry of Transport, State Customs Committee, and Association of International Road Carriers of Uzbekistan (AIRCUZ).

The meeting was organized with a view to the practical implementation of the initiatives of President of Uzbekistan H.E. Shavkat Mirziyoyev on the development of transport, voiced during the Informal Summit of the Turkic Council, held on 31 March 2021 in a virtual format, as well as the arrangements reached in the recent Uzbek-Azerbaijani-Turkish consultations on cooperation in the field of transport (5-7 April 2021, Baku).

At the meeting, the Parties discussed issues of increasing the competitiveness of the Trans-Caspian Transport Corridor and exchanged views on the “Road Demonstration Tour (Road Trade Caravan)” planned to be conducted across the Trans-Caspian route to showcase the viability of the corridor to the world. 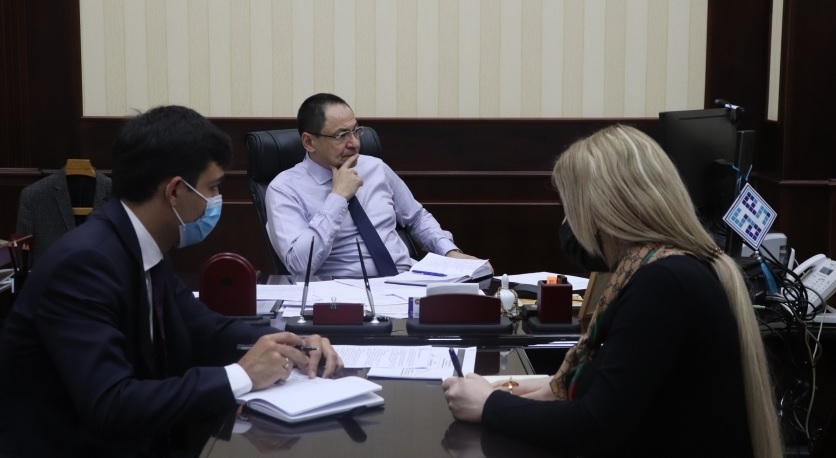 CCI of Uzbekistan discussed with the Int...

Yesterday, an online meeting was held between the Chairman of the Chamber of Commerce and ...

The government delegations of Uzbekistan...

Yesterday, the Deputy Prime Minister, Minister of Investments and Foreign Trade of the Rep...

The Embassy of Uzbekistan in Delhi has held virtual talks with Manish Dalmia, Managing Dir...