ISRS Expert: Issues of the climate agenda in the center of attention of Uzbekistan

TASHKENT, August 11. /“Dunyo” IA/. Marat Aitov, Head of department of the Institute for Strategic and Regional Studies under the President of Uzbekistan in his analytical note “Issues of the climate agenda in the center of attention of Uzbekistan” prepared for the “Dunyo” IA considers the issues of our country's long-term policy in the field of environmental protection, maintaining ecological balance and rational use of water resources, which is designed to further improve the environmental situation not only in the republic, but also in the Central Asian region. 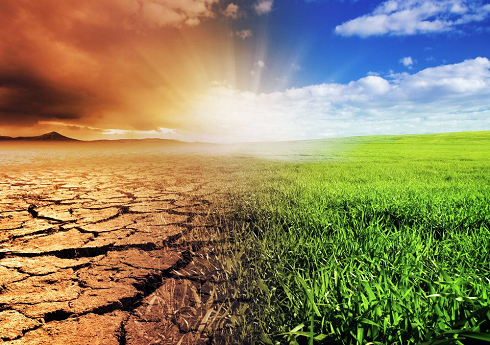 “Nowadays climate change is one of the main challenges of our time. Its consequences are global and unprecedented in scale. Experts predict a further increase in global warming trends, entailing a complex of interrelated problems of food, environmental, water, energy and, ultimately, economic security.

Recently, this issue has become more relevant among the world community. The UN Secretary-General A.Guterres acknowledged that no country in the world is immune from the climate crisis. In this regard, he called for consolidating the efforts of the international community to combat climate change. If we do not take decisive action today, the subsequent adaptation to climate change will require great efforts and costs.

According to the UN, over the past 20 years, more than 1.2 million people have died because of natural disasters. The economic damage from them reached $3 trillion. Scientists estimate that climate change and its consequences will cost the world economy $8 trillion in the next 30 years. It is predicted that by 2050 climate change could wipe off 3% of global GDP.

Uzbekistan and other Central Asian states are among the countries most susceptible to environmental disasters. As the President of Uzbekistan Sh. Mirziyoyev noted, today every country feels the destructive effects of the consequences of climate change, and these negative consequences directly threaten the stable development of the Central Asian region.

According to the World Bank experts, by the end of the XXI century the average temperature in the world will increase by 4 degrees Celsius. Meanwhile, for the Central Asia this indicator will be 7 degrees with the Aral Sea region to endure the greatest increase in air temperature.

Because of global climate change, the area of glaciers in Central Asia has decreased by about 30% over the past 50-60 years. According to calculations, water resources in the Syr Darya basin are expected to decrease by up to 5% by 2050, in the Amu Darya basin - up to 15%. By 2050, the shortage of fresh water in Central Asia may lead to an 11% drop in GDP in the region.

At the same time, the population of the republic is increasing an average of 650 - 700 thousand people a year. By 2030, the population of Uzbekistan is estimated to reach 39 million people; their demand for high-quality water is expected to increase by 18-20% from 2.3 billion cubic meters to 2.7-3.0 billion cubic meters. This will lead to an annual increase in the demand for water in the public utilities sector.

In such conditions, Uzbekistan takes systematic measures to adapt and mitigate the consequences of climate change.

The main priorities of Uzbekistan for mitigating the effects of climate change defined in these documents. They include reducing emissions of pollutants into the atmosphere, rational use of water resources, introduction of new, environmentally friendly technologies in various sectors of the economy, an increase in the share of renewable energy sources, an increase in the coverage of the population with services for the collection and removal of solid household waste.

In order to improve the system of public administration in the field of environmental protection, Uzbekistan carried out institutional reforms. Two independent ministries were established out of the Ministry of Agriculture and Water Management – Agriculture and Water management. The State Committee of the Republic of Uzbekistan for Ecology and Environmental Protection, the Center of the Hydrometeorological Service of Uzbekistan were completely reformed, and the State Committee for Forestry was also created.

The development of ecological culture of a wide range of the population, in particular the younger generation, plays an important role in improving the effectiveness of environmental protection measures. In 2008, Environmental movement of Uzbekistan was launched designed to consolidate the efforts of civil society in this direction. Subsequently, it became an Environmental Party, which made it possible to raise the environmental agenda to the level of political discussions.

The country is taking measures to improve the energy efficiency of the economy, reduce the use of hydrocarbons, and increase the share of renewable energy sources. By 2030, the government plans to double the energy efficiency and reduce the carbon intensity of GDP, ensuring access to modern, inexpensive and reliable energy supply for the population and economy. It is expected to save 3.3 billion kW in the economy of Uzbekistan in 2020-2022 due to measures to improve energy efficiency. 3.3 billion kWh of electricity, 2.6 billion cubic meters of natural gas and 16.5 thousand tons of oil products will be saved. Modern mechanisms and standards in construction will be introduced, compensation for the installation of energy efficient equipment will be provided.

Simultaneously, measures to combat the depletion of water resources are being strengthened.

Uzbekistan pays special attention to measures to minimize the consequences of the drying up of the Aral Sea. Desertification and land degradation in the Aral Sea region occurs on an area of about 2 million hectares. Due to the creation of protective green spaces on the drained bottom of the sea (1.5 million hectares were planted), Uzbekistan is increasing the territories occupied by forests and shrubs. Over the past 4 years, the volume of forest plantations in the republic has increased 10-15 times.

The State Program for the Development of the Aral Sea region for 2017-2021 has been adopted, aimed at improving the conditions and the quality of life of the population of the region. In addition, the Program of integrated socio-economic development of Karakalpakstan for 2020-2023 was approved. In 2018, the International Innovation Center of the Aral Sea Region was established under the President of the Republic.

Uzbekistan is taking active steps to inform the international community of the consequences of the drying up of the Aral Sea, as well as to unite the efforts of the Central Asian countries to combat the consequences of this disaster. In 2018, after a ten-year break, a meeting of the International Fund for Saving the Aral Sea was held in Turkmenistan. In the same year, at the initiative of the President of Uzbekistan, the UN Multi-Partner Human Security Trust Fund for the Aral Sea region was established.

The initiative of the head of Uzbekistan was positively received by the world community, as almost 60 countries co-sponsored the resolution. The Aral Sea region became the first region to which the General Assembly granted such a significant status.

The UN predicts that global climate change will only exacerbate water problems, as well as increase the frequency and severity of floods and droughts. By 2030, the global water scarcity on the planet could reach 40%.

Against this background, Uzbekistan stands for cooperation in the field of water resources on the basis of sovereign equality, territorial integrity, mutual benefit and good faith in the spirit of good-neighborliness and cooperation. Tashkent considers it necessary to develop mechanisms for joint management of transboundary water resources in the region, ensuring a balance of interests of the Central Asian countries.  At the same time, the water resources of the basins of transboundary watercourses should be managed without compromising the ability of future generations to meet their own needs.

In addition, it is important to strengthen the existing regional institutional and legal mechanisms for joint management, as well as the settlement of disputes through negotiations and consultations, taking into account the combination of geographical, climatic, environmental and demographic factors, as well as the socio-economic needs of the States of the region. The implementation of the above measures should contribute to resolving the existing differences in views on the use of water resources in Central Asia, and, as a result, strengthening trust between the countries of the region.

Uzbekistan has become an active participant in the global environmental agenda, having joined and ratified a number of international conventions and relevant protocols in the field of environmental protection. An important event was the accession of Uzbekistan (2017) to the UN Paris Climate Agreement, under which commitments were made to reduce greenhouse gas emissions to the atmosphere by 2030 by 10% compared to 2010. To achieve this goal, a National strategy for low-carbon development is currently being developed, and Uzbekistan is considering achieving carbon neutrality by 2050.

The proactive international activity of Uzbekistan requires special attention. President of Uzbekistan Sh. Mirziyoyev, speaking at international forums, puts forward popular ideas and initiatives aimed at strengthening international and regional cooperation on key aspects of the global agenda, in particular with regard to climate change issues.

The Head of Uzbekistan in his speeches at the 75th session of the UN General Assembly, SCO and ECO summits, the first OIC Summit on Science and Technology, the Consultative Meeting of the Heads of Central Asian states called for joining efforts to address issues related to climate change, as well as to create specific effective mechanisms for regional cooperation in this direction.

At the SCO summit in Bishkek (June 14, 2019), Sh.Mirziyoyev proposed to adopt the SCO Green Belt program in order to introduce resource-saving and environmentally friendly technologies in the organization's countries. At the 14th summit of the Economic Cooperation Organization (March 4, 2021), the President of Uzbekistan put forward the initiative to develop and approve a medium-term strategy aimed at ensuring energy sustainability and broad attraction of investments and modern technologies in this area.

At the third Consultative Meeting of the Heads of Central Asian States, held on August 6, 2021 in Turkmenistan, the President of Uzbekistan called for the development of a regional program "Green Agenda" for Central Asia, which will contribute to the adaptation of the countries of the region to climate change.

The main directions of the program may be the gradual decarbonization of the economy, rational use of water resources, the introduction of energy-efficient technologies into the economy, and an increase in the share of renewable energy sources.

In general, against the background of the actualization of the international climate agenda, the long-term policy implemented by Uzbekistan in the field of environmental protection, maintaining ecological balance and rational use of water resources is timely and should contribute to further improvement of the environmental situation not only in the republic, but also in the Central Asian region as a whole.

At the same time, in order to achieve positive results on the scale of the region, it is very important to continue constructive and mutually beneficial cooperation between the countries of Central Asia. Only through joint efforts can the fragile ecological balance, disturbed by reckless human activity in the region, be restored”.

ISRS Director and Ambassador of Afghanis...

ISRS hosted a meeting between the Director of the Institute, Eldor Aripov and the Ambassad... 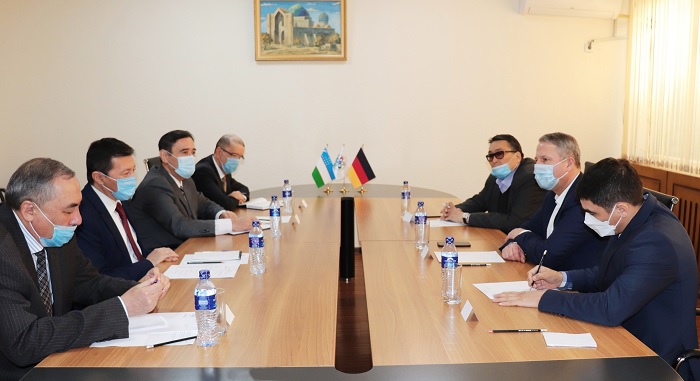 IICA hosted a meeting with the represent...

Today, a meeting with Mr. Ronnie Heine, an Authorized Representative of the Konrad Adenaue... 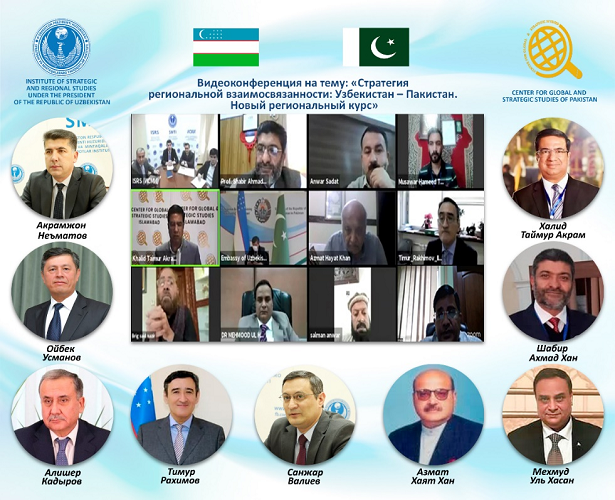