The First Deputy Director of the ISRS Akramjon Nematov: The comprehensive consideration of socio-economic interests of all segments of society in public administration are the most important conditions for sustainable and lasting peace in Afghanistan 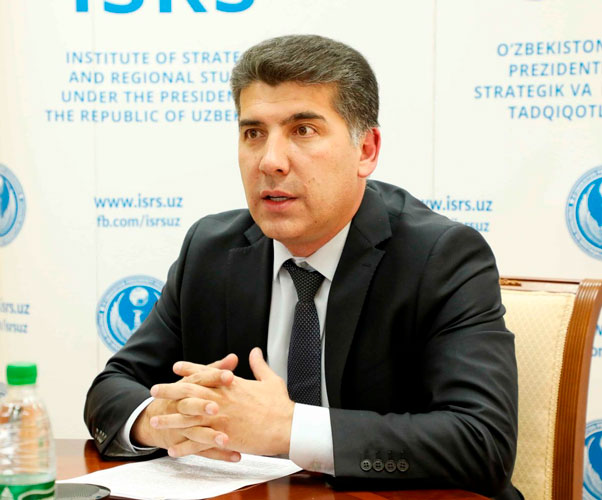 TASHKENT, September 20. /“Dunyo” IA/. The First Deputy Director of the Institute for Strategic and Interregional Studies under the President of the Republic of Uzbekistan Akramjon Nematov commented for “Dunyo” Information agency on the initiatives of Uzbekistan in the Afghan direction put forward at the meeting of the Council of Heads of State of the Shanghai Cooperation Organization (SCO) held on September 16-17:

- Nowadays, one of the key issues on the international agenda is the situation in Afghanistan after the Taliban came to power. And it is quite natural that it became the central topic of the SCO heads of state summit held on September 17, 2021 in Dushanbe. Most of SCO states share a common border with Afghanistan and directly feel the negative consequences of the unfolding crisis. Achieving peace and stability in Afghanistan is one of the main security goals in the SCO region.

The seriousness of this issue and the high degree of responsibility with which states treat its solution is evidenced by the discussion of Afghan issue in the SCO-CSTO format. At the same time, the main goal of the multilateral negotiations was to find agreed approaches to the situation in Afghanistan.

President of Uzbekistan Sh. Mirziyoyev presented his vision of the ongoing processes in Afghanistan, outlined the challenges and threats associated with them, and also proposed a number of basic approaches to building cooperation in the Afghan direction.

In particular, Sh. Mirziyoyev stated that today a completely new reality has developed in Afghanistan. New forces as the Taliban movement have come to power. At the same time, he emphasized that the new authorities still have to go through a difficult way from consolidating society to forming a capable government. Today, there are still risks of Afghanistan returning to the situation of the 90s, when the country was engulfed in a civil war and a humanitarian crisis, and its territory turned into a hub of international terrorism and drug production.

At the same time, the head of state stressed that Uzbekistan, as the closest neighbor, which directly faced threats and challenges in those years, is clearly aware of all the possible negative consequences of the situation development in Afghanistan under a worst case scenario.

In this regard, Sh.Mirziyoyev called on the SCO countries to unite their efforts to prevent a protracted crisis in Afghanistan and related challenges and threats to the Organization's countries.

To this end, it was proposed to establish effective cooperation on Afghanistan, as well as to conduct a coordinated dialogue with the new authorities, carried out proportionately in compliance with their obligations.

First, the Uzbek leader stressed the importance of achieving broad political representation of all segments of Afghan society in state administration, as well as ensuring respect for fundamental human rights and freedoms, especially those of women and national minorities.

As the President of Uzbekistan noted, the prospects for stabilizing the situation, restoring the Afghan statehood and, in general, the development of cooperation between the international community and Afghanistan depend on this.

It should be noted that Tashkent has always adhered to a principled position on the need to respect the sovereignty, independence and territorial integrity of the neighboring country. There is no alternative to a peaceful settlement of the conflict in Afghanistan. It is important to conduct a political dialogue with an inclusive negotiation process that takes into account exclusively the will of all Afghan people and the diversity of Afghan society.

Today, the population of Afghanistan is 38 million people, while more than 50% of it constitute ethnic minorities – Tajiks, Uzbeks, Turkmens, Hazaras. Shiite Muslims are 10 to 15% of the population and there are also representatives of other faiths. In addition, the role of women in the socio-political processes of Afghanistan has significantly increased in recent years. According to the World Bank, the number of women in the population of Afghanistan is 48% or about 18 million. Until recently, they occupied high government posts, served as ministers, worked in education and healthcare, actively participated in the socio-political life of the country as parliamentarians, human rights defenders, and journalists.

In this regard, only the formation of a representative government, the balance of the interests of ethno political groups, and the comprehensive consideration of socio-economic interests of all segments of society in public administration are the most important conditions for sustainable and lasting peace in Afghanistan. Moreover, the effective use of the potential of all social, political, ethnic and religious groups can make a significant contribution to the restoration of the Afghan statehood and economy, the return of the country to the path of peace and prosperity.

Second, the authorities should prevent the use of the country's territory for subversive actions against neighboring states, exclude patronage of international terrorist organizations. It was emphasized that countering the possible growth of extremism and the export of radical ideology, stopping the penetration of militants across borders and their transfer from hot spots should become one of the key tasks of the SCO.

Over the past 40 years, the war and instability in Afghanistan have turned this country into a haven for various terrorist groups. According to the UN Security Council, 22 out of 28 international terrorist groups, including IS and Al-Qaeda, are currently operating in the country. Their ranks also include immigrants from Central Asia, China and the CIS countries. Until now, joint efforts have been able to effectively stop terrorist and extremist threats emanating from the territory of Afghanistan, and prevent them from spilling over into the space of the Central Asian countries.

At the same time, a protracted power and political crisis caused by the complex process of forming a legitimate and capable government may cause a security vacuum in Afghanistan. It can lead to the activation of terrorist and extremist groups, increase the risks of transferring their actions to neighboring countries.

Moreover, the humanitarian crisis that Afghanistan is facing today is delaying the prospects for stabilizing the situation in the country. On September 13, 2021, the UN Secretary-General A.Guterres warned that in the near future Afghanistan may face a catastrophe, since almost half of the Afghan population or 18 million people live in a state of food crisis and emergency. According to the UN, more than half of Afghan children under the age of five suffer from acute malnutrition, and a third of citizens from lack of nutrition.

In addition, Afghanistan is facing another severe drought – the second in four years, which continues to have a serious negative impact on agriculture and food production. This industry provides 23% of the country's GDP and 43% of the Afghan population with jobs and livelihoods. Currently, 22 out of 34 Afghan provinces have been seriously affected by the drought, 40% of all crops were lost this year.

Moreover, the situation is aggravated by the growing poverty of the population of Afghanistan. According to the UN Development Program, by now the share of poverty among the population is 72% (27.3 million people out of 38 million), by the middle of 2022 it may reach 97%.

It is obvious that Afghanistan itself will not be able to cope with such complex problems. Furthermore, 75% of the state budget ($11 billion) and 43% of the economy have so far been covered by international donations.

Experts predict that the difficult socio-economic situation, coupled with the deterioration of the military-political situation, may lead to flows of refugees from Afghanistan. According to UN estimates, by the end of 2021, their number may reach 515,000. At the same time, the main recipients of Afghan refugees will be neighboring SCO member countries.

In the light of this, the President of Uzbekistan highlighted the importance of preventing the isolation of Afghanistan and its transformation into the "rogue state". In this regard, it was proposed to unfreeze the assets of Afghanistan in foreign banks in order to prevent a large-scale humanitarian crisis and influx of refugees, as well as to continue to assist Kabul in economic recovery and solving social problems. Otherwise, the country will not be able to get out of the clutches of the illegal economy. It will face the expansion of drug trafficking, weapons and other forms of transnational organized crime. It is obvious that all the negative consequences of this will be first felt by neighboring countries.

In this regard, the President of Uzbekistan called for the consolidation of the efforts of the international community to resolve the situation in Afghanistan as soon as possible and proposed to hold a high-level meeting in the SCO-Afghanistan format in Tashkent with the involvement of observer states and dialogue partners.

Undoubtedly, the SCO can make an important contribution to stabilizing the situation and ensuring sustainable economic growth in Afghanistan. Today, all of Afghanistan's neighbors are either members or observers of the SCO and they are interested in ensuring that the country does not become a source of threats to regional security again. The SCO member states are among the main trading partners of Afghanistan. The volume of trade with them is almost 80% of the trade turnover of Afghanistan ($11 billion). Moreover, the SCO member states cover more than 80% of Afghanistan’s electricity needs and more than 20% of wheat and flour needs.

The involvement of dialogue partners in the process of resolving the situation in Afghanistan, including Azerbaijan, Armenia, Turkey, Cambodia, Nepal, and now also Egypt, Qatar and Saudi Arabia, will allow us to develop common approaches and establish closer coordination of efforts in ensuring security, economic recovery and solving the most significant socio-economic problems of Afghanistan.

In general, the SCO states can play a key role in the post-conflict reconstruction of Afghanistan, promote its transformation into a responsible subject of international relations. In order to do this, the SCO countries need to coordinate efforts to establish long-term peace and integrate Afghanistan into regional and global economic ties. Ultimately, this will lead to the establishment of Afghanistan as a peaceful, stable and prosperous country, free from terrorism, war and drugs, and to ensuring security and economic well-being throughout the SCO space.

The initiative of the President of Uzbek...

The Consulate General of Uzbekistan in Bangkok has held a meeting with the UN Under-Secret... 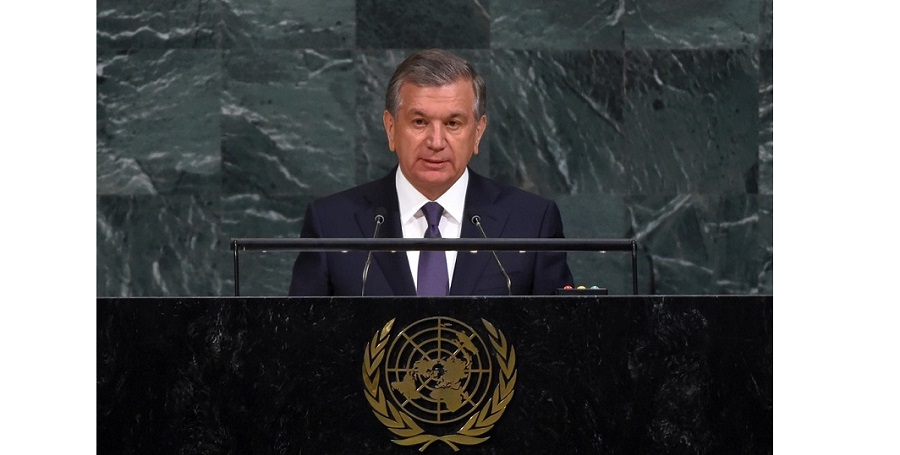 The President of Uzbekistan: In conditio...

President Shavkat Mirziyoyev stated in his address to the participants of Samarkand Forum ... 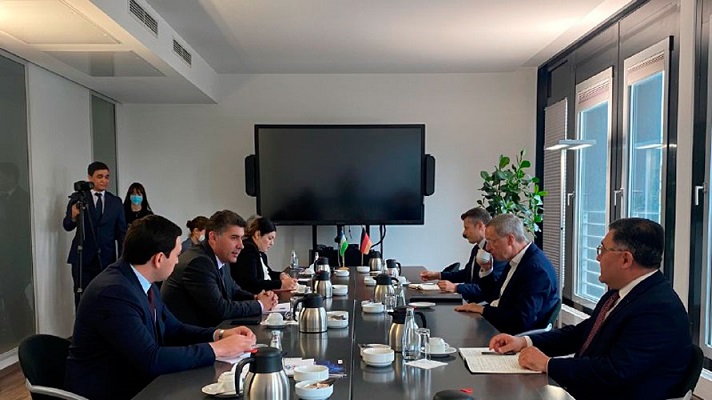 View from Berlin: Uzbekistan is a reliab...

On September 27, Uzbekistan delegation consisting of representatives of the ISRS under the...