The President of Uzbekistan: Today Uzbekistan and Kazakhstan cooperation has been raised to the level of allied relations, which fully meets and proceeds from the long-term interests of fraternal peoples 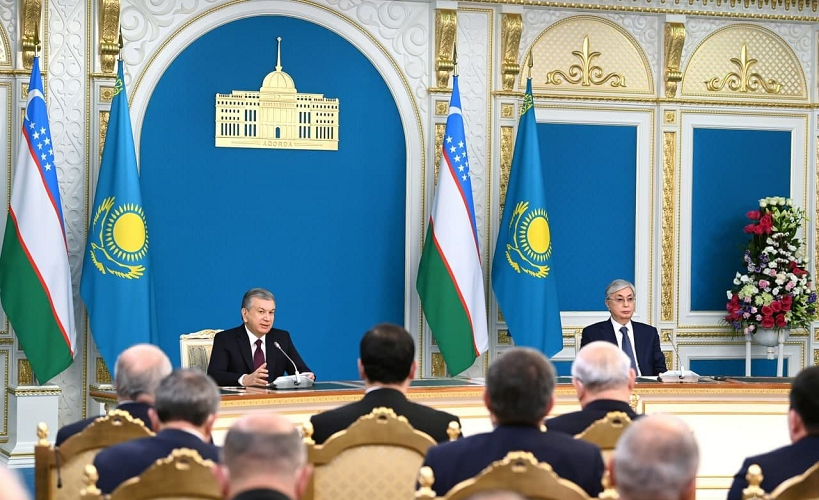 TASHKENT, December 6. /“Dunyo” IA/. After the main events of the state visit, a briefing was held for the media representatives, reports “Dunyo” IA correspondent.

According to the press service of the head of our state, the Presidents expressed satisfaction with the results of the talks, which took place in a traditionally open, confidential and business atmosphere.

During the talks, the whole range of issues of further developing the multifaceted, mutually beneficial cooperation between Uzbekistan and Kazakhstan in all areas of the bilateral and regional agenda, was considered in detail.

President Shavkat Mirziyoyev once again congratulated the people of Kazakhstan on the 30th anniversary of independence.

It was emphasized that in recent years, tremendous changes have been taking place in relations between Uzbekistan and Kazakhstan based on friendship, good-neighborliness and strategic partnership.

The Leader of Uzbekistan noted that today a historic decision has been made – cooperation has been raised to the level of allied relations, which fully meets and proceeds from the long-term interests of fraternal peoples.

“Cooperation between Uzbekistan and Kazakhstan is based on the desire to use the enormous potential of complementarity. We intend to unite our efforts and find new growth points”, Shavkat Mirziyoyev emphasized.

Satisfaction was expressed with the results of trade and economic partnership, which is a priority area of cooperation. Since the beginning of this year, the trade turnover has grown by almost 40 percent, and a record high of $4 billion is expected. During the talks, the goal was determined to increase the trade turnover to 5 billion the next year, and in the long term, to bring it to 10 billion.

It was noted that to expand the supply of agricultural products, the parties agreed to create agricultural clusters, wholesale distribution and logistics centers, and to promote the Agroexpress project.

The importance of the agreements reached in industrial cooperation and interregional collaboration was emphasized. There are already good examples – the assembly of cars, buses and agricultural machinery in Kostanay, the production of textile products and electrical equipment in Turkestan and Shymkent.

Joint projects are being implemented in Uzbekistan in industry, energy, chemistry, construction, banking and others. Following the business events held on the eve of the visit, new investment and trade agreements worth about $6 billion were signed.

“There have not been such indicators yet. And all these are solid agreements that form a good basis for the future”, Shavkat Mirziyoyev said.

It is planned to implement projects for the construction of the Uchquduq –Kyzylorda railroad and highway, as well as the Turkestan – Shymkent – Tashkent high-speed railroad to expand the potential of the transport and transit sector.

Agreements in the spheres of culture, science and education, as well as healthcare and tourism, were also noted.

“In the current difficult times, culture and spirituality are gaining even greater importance, having a beneficial effect on the minds and hearts of people, especially the younger generation”, Shavkat Mirziyoyev emphasized.

It was noted that more than eight hundred thousand ethnic Kazakhs currently live in Uzbekistan. All conditions are created for the development of their national culture, language, traditions. There are about four hundred schools with the Kazakh language of instruction.

The Kazakh National Cultural Center, which has eight regional branches, has been actively operating in Uzbekistan for thirty years.

“We are proud that among our fellow Kazakhs there are those awarded the high title of Hero of Uzbekistan and other state awards, senators and deputies, ministers and generals, heads of large companies”, Shavkat Mirziyoyev said.

The Heads of State agreed to adopt an appropriate program to widely celebrate next year the 30th anniversary of the establishment of diplomatic relations between Uzbekistan and Kazakhstan.

Noting the interaction at regional and international platforms, the President of Uzbekistan emphasized that today it was possible to form an effective platform for Consultative Meetings of the Heads of State of Central Asia, within the framework of which the ways of comprehensive development of our common home are determined.

The main attention at the talks was paid to the issues of countering the challenges to security and stability in the region, primarily against the background of the situation in neighboring Afghanistan. It was confirmed that the positions of Uzbekistan and Kazakhstan completely coincide on this issue.

Uzbekistan supports the initiatives of Kazakhstan within the framework of its chairmanship in the Conference on Interaction and Confidence-Building Measures in Asia, as well as in the Commonwealth of Independent States. Kazakhstan supports Uzbekistan’s chairmanship in the Shanghai Cooperation Organization and the Economic Cooperation Organization.

“During this visit, we signed a solid package of documents. The most important of them is the Declaration of Allied Relations, which testifies to the highest level of trust and partnership, readiness to act together and provide all-round support. We are firmly committed to strengthening centuries-old friendship, good-neighborliness and large-scale cooperation for the prosperity of the two fraternal peoples”, the President of Uzbekistan said.

President Kassym-Jomart Tokayev expressed satisfaction with the results of the talks, during which an exchange of views took place on a wide range of issues.

President Shavkat Mirziyoyev invited the President of Kazakhstan to visit Uzbekistan at a time convenient for him. 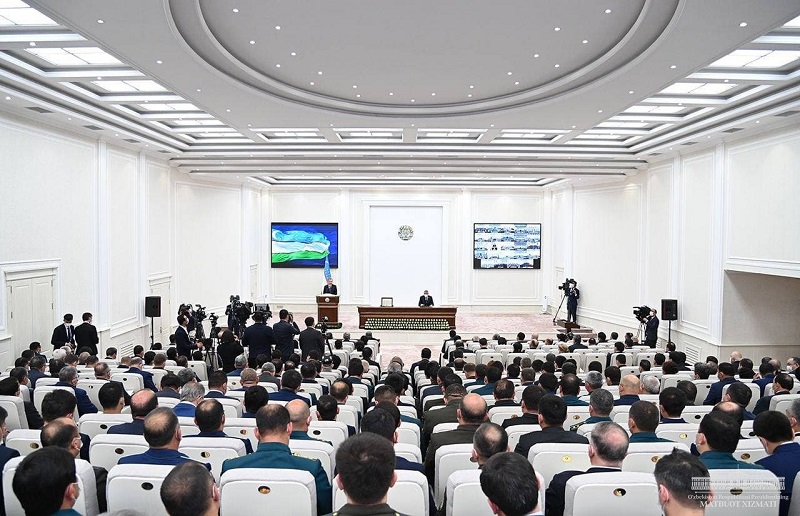 On the proposal of the President of Uzbe...

Today, an out-of-schedule session of Tashkent Regional Council of People’s Deputies is bei... 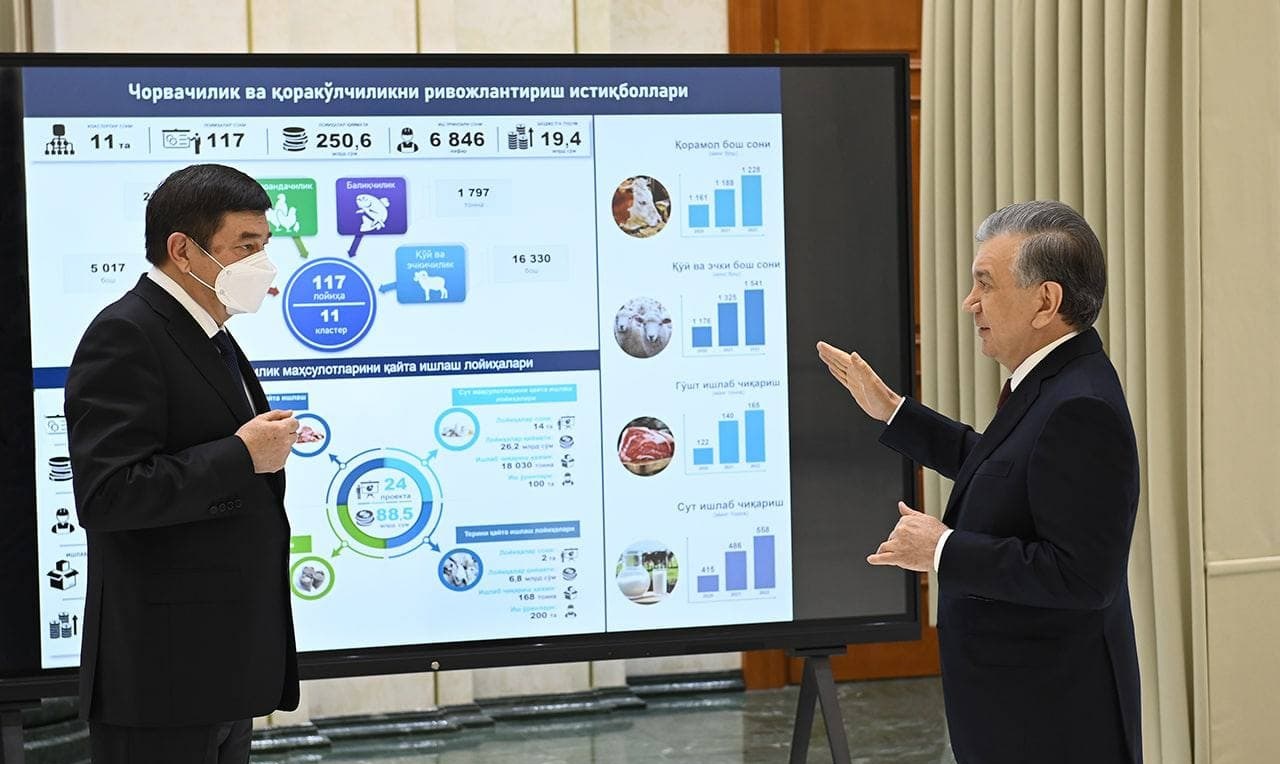 Investment projects to be implemented in... 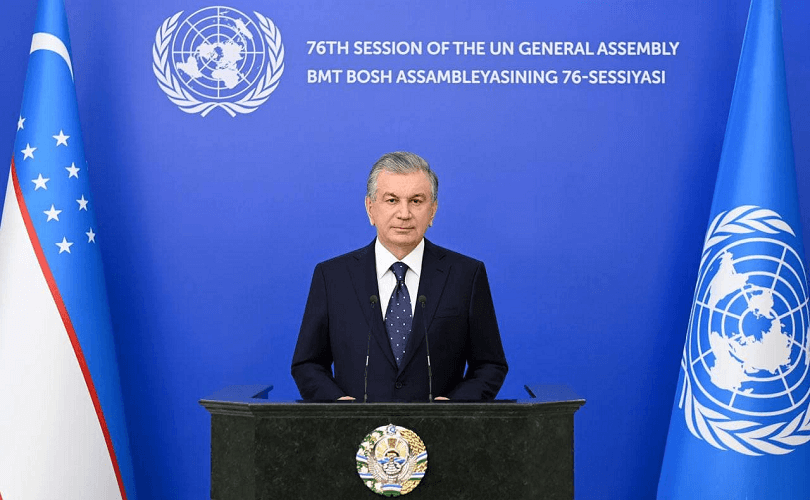 Speech by President Shavkat Mirziyoyev a...

First of all, I sincerely congratulate Mr. Antonio Guterres on his re-election as the UN S...