This was on the agenda of “Beyond Cotton: Lessons Learned and Next Steps in Uzbekistan” webinar that took place at the Ministry of Employment and Labor Relations of Uzbekistan.

Representatives of the Ministry, International Labor Organization, the United States Council for International Business (USCIB), ILAB unit of the US Department of Labor, the American Apparel and Footwear Association (AAFA), Cotton Campaign and local civil society activists joined the discussion.

First Deputy Minister of Employment and Labor Relations in his speech listed 5 main lessons. Among them are any form of forced labor during the cotton campaign has a very negative impact on the development of our cotton and textile industries and undermines the reputation of Uzbekistan; government must take strict measures to eradicate forced labor and ensure their practical implementation; deep roots of forced labor in cotton production will require hard work and focused efforts to be eradicated; the cotton sector is a critical source of employment for hundreds of thousands of citizens, so the importance of reforms cannot be rejected and finally, the involvement of civil society is essential to effectively address forced labor.

In addition, Mukhitdinov noted that forced labor is unacceptable in the economy of Uzbekistan and the country is committed to resolve this issue. Particularly, he put forward an idea of establishing a four-way mechanism for interaction between the government, local cotton farmers and textile manufacturers, foreign brands and civil society groups on the elimination of forced labor.

In an interview with “Dunyo” correspondent, First Deputy Minister stated that a four-way collaboration will allow establishing trustworthy cooperation between all parties.

“Cotton Campaign and other partners do not mind cooperation within this format. A four-way mechanism will serve as a platform for international brands to come to Uzbekistan and witness our commitment to end forced labor,” he said.

According to 2019 third party monitoring report, 1,7 million people picked the cotton in the fields compared to 3,2 million in 2015.

Webinar participants applauded Uzbekistan’s achievement in eradicating systemic and systematic child and forced labor as well as significant improvements in 2019 season. Along with this, Cotton Campaign and AAFA representatives highlighted the necessity to continue efforts in 2020. Particularly, reduction of forced labor cases in 2020 and NGO registration.

“Undeniably, Uzbekistan has made a great progress, but major U.S. law doesn’t differentiate between one or one thousand cases,” noted Nate Herman, Senior Vice President at Policy AAFA Global referring to 19 U.S. Code § 1307 that says: “All goods, wares, articles, and merchandise mined, produced, or manufactured wholly or in part in any foreign country by forced labor shall not be entitled to entry at any of the ports of the United States…”.

AAFA official also spoke on the negative impact of COVID-19 and international shifts that had its impact on US textile and apparel industry. With regards to this, Uzbekistan has new opportunities to embrace.

Noteworthy, that 2019 TMP was conducted by local human rights activists. Jonas Astrup, the International Labor Organization’s chief technical adviser in Uzbekistan in an interview with “Dunyo” confirmed that these people are not affiliated with any government structure: “This gives credibility to the monitoring. Moreover, the government allowed human rights activists to do their job. Generally speaking, we did not see any case of harassment or intimidation”.

Local Human Rights Defender Shukhrat Ganiev who spoke at the event reaffirmed his readiness to conduct monitoring regardless of government’s or international community’s will until the last violation is not addressed. “Previous year’s monitoring showed capacity of local human rights activists to conduct the work independently, and we will conduct the monitoring this year,” he added.

The article “Youth Policy of Uzbekistan in Global Stage” by Akmal Saidov, the First Deputy...

The Code on Voluntary Commitments of Sta...

During his speech at the seventy-fifth session of the General Assembly, in September 2020,... 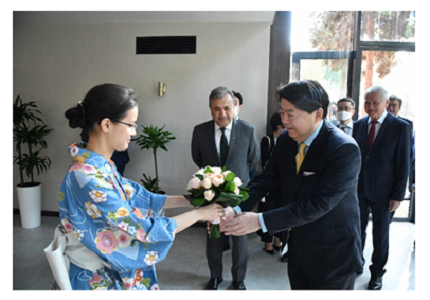 The Minister of Foreign Affairs of Japan Yoshimasa Hayashi has met with teachers and stude...