TASHKENT, May 6. /“Dunyo” IA/. The U.S. Secretary of State and the Ministers of Foreign Affairs of the Republic of Kazakhstan, the Kyrgyz Republic, the Republic of Tajikistan, Turkmenistan, and the Republic of Uzbekistan met April 23, 2021 virtually in the C5+1 format, reports “Dunyo” IA correspondent.

The text of the final Joint Statement on the C5+1 Virtual Ministerial, which took place on 23 April, was published yesterday.

Participants celebrated the five-year anniversary of the C5+1 format, inaugurated in November 2015, noting the success of the platform in enhancing regional dialogue, cooperation, and partnership among the participating countries. The format has contributed to increasing economic and energy connectivity and trade, mitigating environmental and health challenges, jointly addressing security threats, and advocating for the full participation of women in all aspects of the political, economic, and social life of member countries.

Participants recommitted to addressing common challenges collaboratively in pursuit of a prosperous and secure Central Asia free to pursue its interests with a variety of partners, including the United States.

In the April 23 Ministerial Dialogue, participants addressed a range of shared challenges as they:

• Discussed the situation in Afghanistan and the continuing need for all countries in the region and the broader international community to support the Afghan-led, Afghan-owned peace negotiations for a united, sovereign, stable, democratic, and self-reliant Afghanistan that is free of terrorism and at peace with itself and its neighbors;

• Called on all parties to the conflict in Afghanistan to reduce the level of violence in the country and on the Taliban not to pursue a Spring offensive, so as to avoid further casualties and to create an environment conducive to reaching a negotiated political settlement;

• Welcomed the Central Asian countries’ important contributions to regional stability and Afghanistan within the framework of international and multilateral mechanisms and dialogues and through their cooperation with Afghanistan across energy, economic, cultural, trade, human rights, and security lines of effort;

• Supported efforts to preserve the economic, social, political, and development achievements of the last two decades in Afghanistan, and agreed to build upon those gains by upholding human rights, especially women’s rights;

• Agreed to the continued development of security cooperation between the United States and the countries of Central Asia as a means of promoting stability and regional security and countering cross-border threats emanating from Afghanistan;

• Emphasized the importance of continued law enforcement cooperation and information sharing at national, regional, and international levels to counter the problem of drug trafficking in Central Asia;

• Supported the continuation of regional energy infrastructure and connectivity projects as a means to enhance electrical connectivity and energy integration, promote regional cooperation, and provide transit revenues and reliable energy to Afghanistan and countries in Central Asia;

• Affirmed their commitment to integrate more renewable sources of electricity as a driver of clean and affordable energy;

• Reaffirmed the importance of projects that promote regional connectivity and transit trade through the extension of transportation networks connecting Central Asia to South Asia via Afghanistan;

• Agreed to continue support for high quality institutions of higher learning in Central Asia that serve students from across Central Asia and Afghanistan as a means of increasing regional connectivity and understanding;

• Agreed to deepen cooperation in prevention of trafficking in persons and to support rule of law and good governance;

• Appreciated the United States’ continued commitment to development and investment projects in Central Asia in cooperation with national development and development finance agencies, as well as the U.S. intention to support women’s business associations across the region;

• Recognized the impacts of climate change on C5+1 countries and agreed to work together to protect those who are most vulnerable, and to raise global ambition on the road to COP 26 to be held in Glasgow in November 2021.

• Welcome the United States’ proposal for a future C5+1 meeting between the Special Presidential Envoy for Climate John Kerry and representatives of the Central Asian countries;

• Agreed the next C5+1 High-Level Dialogue expected on the margins of the Government of Uzbekistan-hosted regional connectivity conference in July 2021, will review the program of work adopted in 2020 and adjust it as necessary;

• Agreed Ministers will seek an opportunity to meet again by the end of 2021”.

Address by the Foreign Minister of Uzbek... 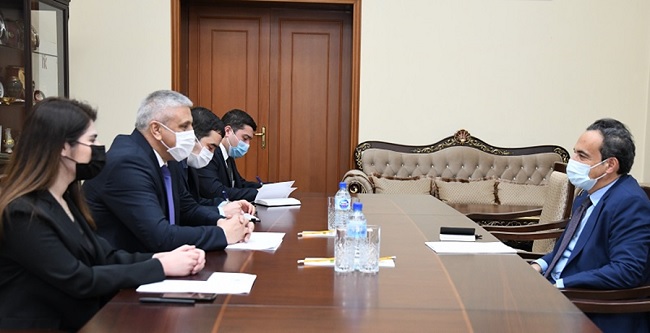 Prospects for enhancing the legal framew...

Yesterday, Head of the MFA’s Treaty and Law Department, Komil Rashidov, has met with the A... 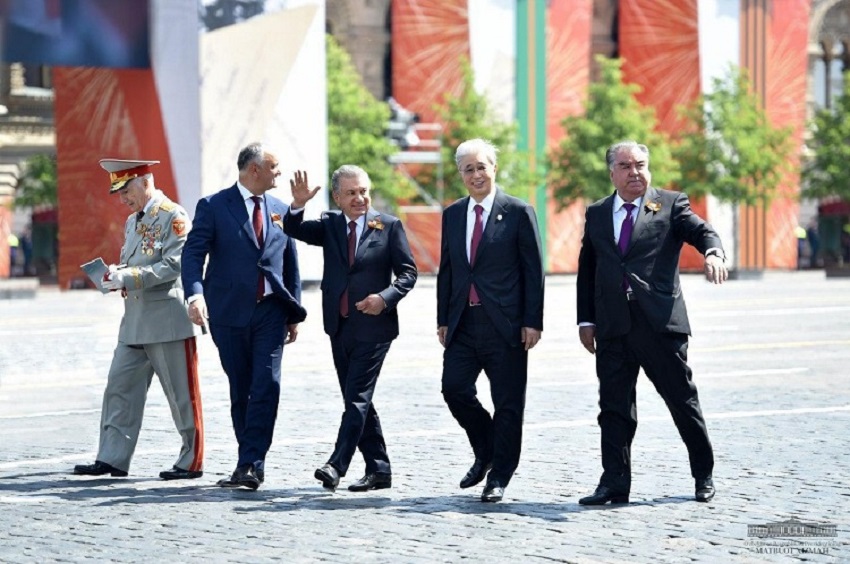 As you may know, Russia’s capital city of Moscow was to play host on May 9 to a parade in ...